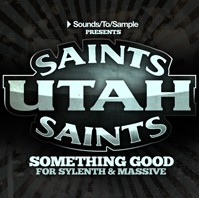 Sounds To Sample has released Something Good for Sylenth & Massive by Utah Saints, a soundset for Native Instruments Massive and LennarDigital Sylenth1.

After hanging up the Utah Saints name for the later half of the 00’s Tim Garbutt and Jez Willis have returned under the guise to release their first preset pack for Sounds to Sample, Utah Saints Good Stuff for Sylenth and Massive!

With over 140 patches combined for the planets two most popular VST’s Massive and Sylenth, the Utah Saints debut preset pack arms producers of any genre with the sounds they’ll need to write the melodies and baselines for their next chart topper.

From Rave to Moombahton, or Breaks to Progressive, Utah Saints Good Stuff for Massive and Sylenth is more than just good stuff, it’s gods greatest gift to electronic music producers!

The soundset is available to purchase for $24.99 USD.