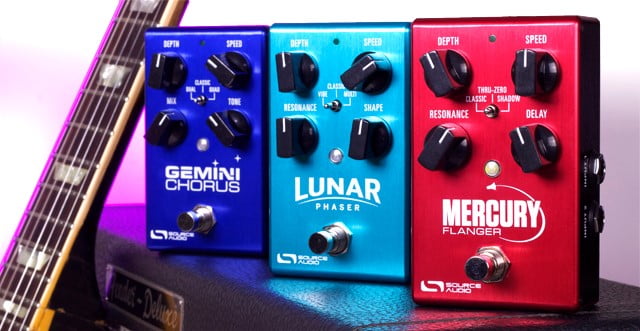 On the surface, this trio of stereo modulation effect pedals features a streamlined, user-friendly control sets and three-position toggle switch to select between each pedal’s three effect flavors. Beneath their sleek exterior, each pedal is a powerhouse of function and flexibility. Every One Series pedal is compatible with the Source Audio Neuro Mobile App (a free download for iOS and (coming soon) Android). The Neuro App gives users access to an additional set of adjustable parameters, bonus effect algorithms, and the ability to save, download, and share presets. Every One Series pedal can also couple with the Neuro Hub (a $99 purchase), which gives them full MIDI functionality and 128 presets.

“Modulation effects create perhaps the most beautiful sounds of all. The Lunar Phaser, Gemini Chorus, and Mercury Flanger are the best sounding modulation pedals I have ever heard right out of the box” says Source Audio President, Roger Smith. “But for those that really want to dive in and customize their tone, the One Series is packed with “under-the-hood” tone sculpting options.”

Each pedal in the line functions as a simple, stand-alone stereo effect with exquisite tone and powerful 56-bit processing. The Lunar Phaser features a Uni-Vibe style effect, a 4-stage, and an 8-stage phaser. The Lunar’s controls include Depth, Speed, Resonance, and a Shape knob that morphs the LFO shape from a smooth sine wave to a choppy and aggressive square wave. The Gemini Chorus features a single voiced chorus, a dual chorus, and a quad voiced chorus. The Gemini knobs include Depth, Speed, Tone, and Mix. The Mercury Flanger includes a single voiced flanger, Thru-Zero flange, and Shadow flange, which is an especially resonant flanger. The Mercury’s controls include Depth, Rate, Resonance, and Delay time, which can be adjusted to create a chorus-like effect.

Like all pedals in the One Series line, the Lunar, Gemini, and Mercury are compatible with the Neuro Mobile App. Link any of the pedals to the Neuro App via Input 2 on the pedal and the mobile device’s 1/8″ headphone jack to access Source Audio’s free library of additional phaser, flanger and chorus effect algorithms. The App also offers an extended set of adjustable parameters, including Wet/Dry Mix, Output Level, Tremolo, A 4-band Parametric EQ, Lo Retain, Advanced Signal Routing, and more. After an effect has been fine tuned, it’s possible to burn the customized effect directly to one of the three toggle switch positions on the pedal. Customized effects can also be saved as presets in a private effects library within a personal user profile or published and shared with other Neuro users. Neuro users can also browse and download factory presets, user presets, and presets dialed in by Source Audio’s growing list of endorsing artists.

One of the most interesting features of the Lunar, Gemini, and Mercury is their ability to share algorithms. With the Neuro Mobile App all of the effect algorithms from each pedal in the modulation trio are interchangeable. This means, for example, it’s possible to load the Mercury Flanger’s Thru-Zero Flange into the Gemini Chorus or upload the Lunar Phaser’s Uni-Vibe effect to the Mercury Flanger. Essentially owning one of the One Series modulation pedals is like owning all three.

The pedals also work with all of Source Audio’s external controllers and can receive MIDI messages. Plugging the Source Audio Tap Tempo Switch into the Sensor Input engages the tap tempo function. The tap tempo rate can then be broken down into beat divisions, controlled with the Speed knob. Similarly, the LFO rate will sync to MIDI clock messages sent from digital recording software via the USB port or the Neuro Hub. External expression control is also possible with Source Audio’s Dual Expression Pedal, Reflex Universal Expression Controller, and Hot Hand 3 Universal Effects Controller. Expression control can be assigned to a single parameter or multiple parameters simultaneously.

In addition, when Source Audio One Series Pedals are connected to the Neuro Hub (formerly Soundblox Hub), users can access their full MIDI capabilities and save up to 128 multi-pedal presets complete with external expression control. Each preset can be recalled via MIDI program change (PC) messages using an external MIDI foot controller.

“One Series pedals are the culmination of everything we’ve learned about effects over the last 10 years. They balance the desire for great sounding and simple to use effects pedals with the powerful features of advanced editing and MIDI control,” says Jesse Remignanti, CTO at Source Audio. “We feel that we’ve created a line of pedals that truly harness the power of contemporary technology with the look, feel, and sound of vintage stompboxes.”

The Lunar Phaser, Gemini Chorus, and Mercury Flanger are available for MSRP $209 USD each ($149 USD street).