Squaredheads has released version 2.0 of Nora, a pattern based arpeggiator / phrase sequencer that is designed to allows the creation of solo melodies, rhythmic basslines, or stabs. 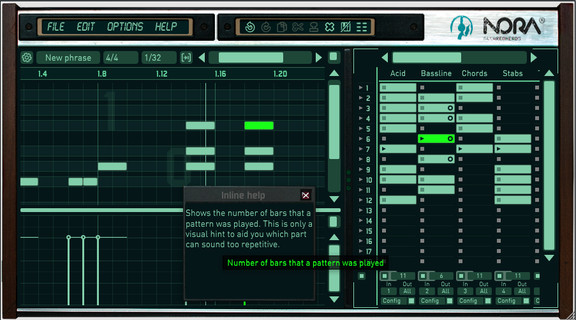 Nora employs the workflow of a DAW for a creative, simple and quick edition with a complete integration among the modules. Nora can be sequenced by either a linear manner or by patterns triggered by MIDI.

Thanks to its polyphonic pianoroll technology and its real-time effects, Nora gives the user complete control over the arpeggiator pattern (note-length, overlapping notes/chords, velocities, spaces between notes, etc.)

The engine has been re-designed from scratch to offer more precision at the sample-level. This way, Nora produces an output that is loyal to the input, without perceptible latency. Moreover, it supports two operation modes: “Free”, a mode in which output notes are always in line with input chords, and “Static”, in which input chords are adapted to the notes of Nora, resulting in smoother changes. Nora now supports up to eight simultaneous tracks, each of them with an arpeggiator engine and individual settings, like MIDI routing.

Nora for Windows and Mac (VST/AU) is available at an introductory discount of 15% until December 30th, 2014. Regular price 49 EUR.