Chance The Rapper is a Chicago-born Hip-Hop artist with more than a little Gospel influence in his impressive catalogue.

Sometimes rapper, sometimes soulful singer, and most things in between, Chance’s most recent road trip, the Magnificent Coloring World Tour, has been more theatrical than previously, even bringing that gospel influence to the fore with a puppet choir to accompany him and The Social Experiment backing band.

SSL L300 live consoles, supplied by VER Tour Sound, were specified by both Kyle Bulmann (Front of House) and Robert Ziemba (Monitors) for the tour, selected after the pair had gone on the hunt for something that would be strong from every angle. 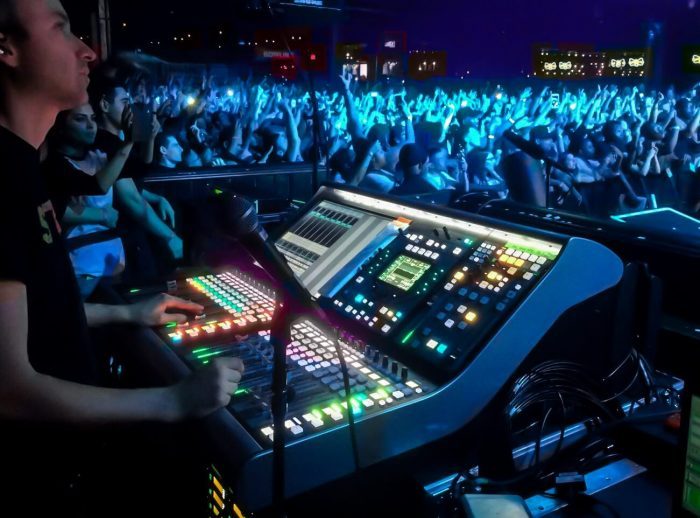 Bulmann cites the combination of top-notch sound quality and open workflow as being better than any other current platform. He needed something that could deliver the complex aesthetic of an artist that dabbles in many genres without being forced into one sonic signature… “I wanted to be able to dial in more colour – more character,” he comments. “Even in my initial tests with a few tracks I was able to tell right away that the sound was top notch, especially the sound of the pre-amps and the effects – the on-board saturation and dynamics were fantastic….

“And after poking around for a bit, it was obvious that the workflow was fantastic as well. It’s very ‘user-definable’. You’re not stuck operating the console in only one or two ways. I felt immediately at home with the SSL.”

In monitor world, Ziemba had a busy tour and needed something that could cope with a complex show. “”With mixes for the puppeteers, the techs, the band, and our video guy to deal with, I had a lot going on… Even with that much, it didn’t get cluttered or confusing. There was never a problem with anything, and it sounds great.”

For Ziemba, the console also shone in rehearsals. He actually started at rehearsals a couple of days late due to another commitment, but had managed to spend time at the SSL LA office building a show file and was amply prepared. “Rehearsals are often the busiest days for a Monitor Engineer,” he says. “As soon as the band takes a break the Musical Director might start running tracks and he still needs his ears. In a way I never get to leave the desk.

“With other consoles, when you really want to start moving layouts around and reorganising your workflow, or building a reverb plug-in and so on, you have to think twice – they often kill the audio and a band could lose confidence. The L300 doesn’t do that.”

During the tour Ziemba was often asked about the console by the house Engineers: “I always said that I can’t think of anything to complain about!” He says. “Usually every desk has one or two things that you wish it could do, or wish it didn’t do, but I feel like everything was thought out on the desk. ”

The show inputs are 16 channels from the drum kit, dry and FX lines from the trumpet player, four keyboards, six channels of tracks, click, and seven RF mic channels. “With all the talkback and utility inputs, the show ended up being about 60 channels,” explains Bulmann.

He notes that one of his biggest challenges of the tour came from Chance’s dynamic vocal range. “It’s around 40dB… The real intimate, raspy, soulful singing that he does has a wildly different tone than the powerful hip-hop passages. When he’s rapping there’s a lot of mid-range in his voice that isn’t there for the more intimate vocals. Being able to feed different processing chains separately via Stems was really helpful.”
“The Stem architecture on the L300 played a big part in allowing my workflow to reflect what the show needed. On some other consoles, to feed a bus into another bus you’d need actual patch cables. With the SSL Stem channel-type you can do it all internally, and choose the ideal pick-off point. That’s fantastic.”

Both Bulmann and Ziemba were very happy with the L300 consoles and want to continue using SSL Live consoles in the future, especially when it comes to the sound. When asked what makes the difference, Bulmann offers: “Part of it is the dynamic range inside the console. The front end is so clean and there’s so much headroom internally that the band can be as free-spirited – as dynamic – as they want and the console never sounds like it’s being stressed. You can hit a Stem pretty hard, then go into another Stem, then a Master, then a Matrix, and make adjustments at any point without ever running out of headroom. You’re able to do things differently. You can move a bus compressor post-fader or pre-fader with the quick drag of a finger and dial in a wet/dry balance just as fast. That changes how you use them – how you build your show. You can choose let the show breathe a little bit more just like that.”