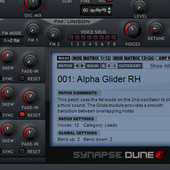 In collaboration with Alpha Centauri and Bassline Records Synapse Audio announces a patch contest for Dune. Anyone can participate, including demo version users (you can save patches in the demo version, just not recall them).

Submit one or more patches to us via email (patch-submissions@synapse-audio.com), and win one or more of the following prizes

The contest ends 21 December, 2010. Users who participate and win a product they already own may either pick an alternate prize or get a voucher of that value.