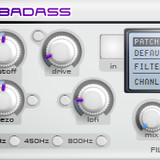 Tek’it Audio has announced the release of Badass, a filter and distortion effect plug-in for Windows.

Badass filter and distortion plug-in, give to your sounds this little bad grain or destroy them completely with the help of distortion effects, filters, lowfi effect and ring modulator.

Each effect can be used individually, but combined they become a powerful tool to distort your sound.

Badass is available to purchase as a VST effect plug-in for Windows PC, priced at 17 EUR.