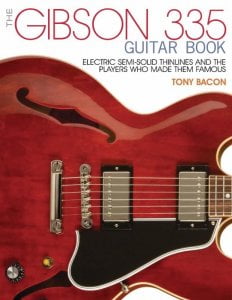 Backbeat Books has announced The Gibson 335 Guitar Book, a book about the Gibson ES-335 and related models, as played by B.B. King, Alvin Lee, and Eric Clapton, among other virtuosos.

The book is in the tradition of Tony Bacon’s bestselling series of guitar books and is really three great volumes in one. First, dozens of vintage and modern guitars are pictured in a gallery of greats that add up to a must-have semi-solid collection. Second, an absorbing tale takes you from the introduction of the 335 on to the prime early models and the changes that followed and through to the recent guitars of the modern Gibson era, all the while setting the technical achievements in their musical context. Third, there is an exclusive guide detailing all the info a collector might want on original models, reissues, new guitars, signature models, serial numbers, and more.

All the classic models are here – ES-335, ES-345, ES-355, and ES-330 – as well as some the lesser-known models and offshoots, including the Crest, the ES Artist, the ES-Les Paul, the ES-347, and the ES-339, along with a good showing of signature models for famous players. There are archive and new interviews with Gibson personnel over the years and with many leading 335-family players, including Eric Clapton, Dave Edmunds, Dave Grohl, Grant Green, Justin Hayward, Jorma Kaukonen, Lee Ritenour, and many more.