The Loop Loft has released Indie Rock Drums, a new title in the MIDI Loops series of drum grooves, fills and breaks. 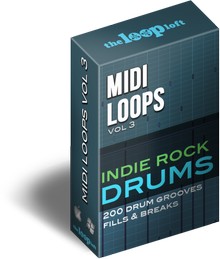 Are you tired of cheesy MIDI drum loops that sound like they were programmed by a product manager at Casio who has probably never drank a PBR in his life, let alone, been to a Lightning Bolt show? Are those tired MIDI beats that came preloaded with your DAW cramping your indie rock lifestyle? Well, The Loop Loft is here to save you.

We spent months traveling across the United States, visiting various indie rock cities, towns and villages. And through the natural wonders of musical osmosis, we soaked up the certain je ne sais quoi that goes into making quality indie rock drum beats. In Wisconsin, we grew beards, picked up some brushes and got real folky. In DC, we downed a fifth of Jäger, smashed it against the gates of The White House, and got our post-hardcore on. In Seattle, we sat around and made fun of Portland for several hours, then cranked out some uptempo grooves, appropriate for any Sub Pop release.

This entire collection was recorded live on a drum kit, providing you with all of the subtleties and dynamics that can only come from a drummer that is currently living at his girlfriend’s place.

The Indie Rock Drums MIDI pack is available to purchase for $29 USD. It is also included in the new MIDI Drum Loop Bundle. 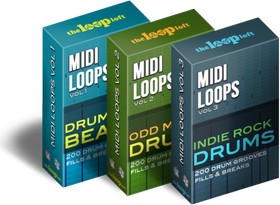 We’ve bundled all three of our popular MIDI Drum Loop sessions, providing you with a massive range of the authentic and unique grooves that The Loop Loft is known for.

Consisting of our genre-spanning Drumatic Beats, the über-hip Indie Rock Drums and the angular, yet highly musical Odd Meter Drums, The MIDI Drum Bundle is packed full of inspiring loops that will take your compositions to the next level, all at a savings of 25%!