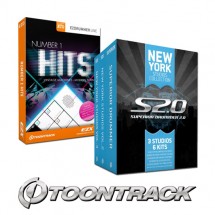 First up, if you use EZdrummer or Superior Drummer 2.0, why not treat yourself to a new EZX expansion pack with 70% off the acclaimed Number 1 Hits EZX? Produced by top engineer Niklas Flyckt, this expansion presents a fusion between organic, electronic, high-tech and vintage to deliver the definitive collection of billboard busting drums. Offer RRP: £15.00 / €18.18

Next, if you´ve been considering delving into the world of Superior Drummer 2.0, our second exclusive deal could be just what you´ve been waiting for. Combining Superior Drummer with two New York SDX expansion packs, this collection of titles would normally cost £461 / €577 if bought separately but this weekend you can buy them all for just £199 / €259.50.