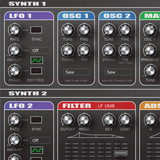 TAL-NoiseMaker is an improved version of TAL-Elek7ro and has a completely new synth engine and a lot of improvements in sound and usability. The synth also includes a small effect section with a reverb, chorus and a simple bit crusher effect.

Version 2.0 includes some big extensions as an envelope editor, a resizable GUI, a vintage noise control and several bugfixes. Presets are compatible with version 1.x

TAL-NoiseMaker is available to download as a freeware instrument plug-in for Windows and Mac (VST/AU).