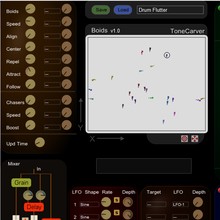 It features a 2D “Boid” swarm as a set of modulators for the grain and delay parameters. This plugin grew out of an interest to accomplish two different goals:

The Boid Swarm represents a set of flocking boids (a boid is a “Bird Android” – see Craig Reynolds work: www.red3d.com/boids). There are a few simple rules that each boid uses to determine where it will fly to on the next swarm advance. These include rules for how fast to fly, how near to fly to other boids, how strongly to move to the center of the flock, how strongly to follow a leader boid, and how strongly to match the position and direction of nearby boids.

The swarm space that the boids fly in is treated as a 2D coordinate system where the X (horizontal) and Y (vertical) position of each boid can be used to modulate controls. A swarm may contain up to 200 boids.

For example, the X position of a boid can be assigned to control the pan value for the delay taps. For each delay tap, the X position of the boid associated with that delay tap will determine its pan position in the output stereo field. Different taps will have different pan values depending on the location of the boid associated with the tap. In this configuration delay tap signals will move through stereo positions as the boids move through the swarm space.

Each of the parameters for the grain streams and delay taps can be modulated using the position of the boid associated with the grain/tap (and/or traditional LFO modulators).

The plugin is a free download at KVR (Windows VST).