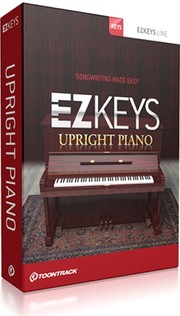 Toontrack has announced the release of EZkeyz Upright Piano, a new sound library for EZkeys, featuring the sounds of a carefully sampled Östlind & Almquist piano.

After the overwhelmingly successful launch of our revolutionary songwriting tool and software piano EZkeys, we are happy to announce the next step in the evolution! Please welcome, EZkeys Upright Piano as well as a 1.1 software update introducing a host of new features!

Grand, Upright or Both? There are two individual versions of EZkeys: Grand Piano and Upright Piano. Both products feature the same software, functionality and MIDI – the difference lies solely in the sounds. An owner of either product can buy the other at a discounted price!

Toontrack has also updated EZkeyz, introducing several new features and improvements. Version 1.1 is a recommended update for all EZkeyz users and is required for the Upright Piano to operate.

The EZkeyz Upright Piano is available to purchase for 139 EUR. The upgrade expansion from EZkeyz Grand Piano is 69 EUR.