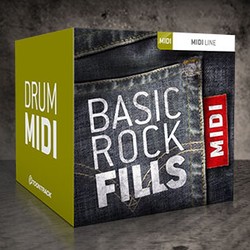 Toontrack has announced the release of Basic Rock Fills MIDI, a follow-up to the popular Basic Rock MIDI that was released earlier in the year.

The Basic Fills pack focuses entirely on the one thing you can never get enough of: fills. The little twists and turns that accentuate, ornate or make for smooth transitions in your songs – the bits and pieces that make your music elevate and transcend.

“I sometimes find that drummers over-complicate things and dramatize their fills too much. I am not a complicated drummer and never aspired to be. I don’t want to get in the way of the song, just make it lift off where it truly needs to and harness it in between”, says drummer Martin Kristoffersson.