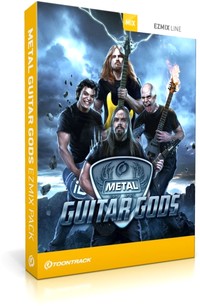 Toontrack has announced the Metal Guitar Gods EZmix Pack, an expansion pack for EZmix 2, focusing solely on amp and cab simulation presets for guitar and bass.

It comes with everything from rhythm, lead and clean sounds to settings for acoustic guitar and bass. All content was custom designed by four of the most iconic and trendsetting guitarists in metal: Fredrik Thordendal (Meshuggah), Mattias IA Eklundh (Freak Kitchen), Misha “Bulb” Mansoor (Periphery) and Devin Townsend (ex-Strapping Young Lad, The Devin Townsend Project).

We call this colossus of a product Metal Guitar Gods simply because these four gentlemen are nothing short of gods. Fredrik for being the father of “Djent” and for forever having changed metal as we know it by introducing eight-string guitars. Devin for continuously pushing the boundaries and the perception of what “metal” is. IA for gathering inspiration from all corners of the world, channeling it through his guitar and ending up with highly personal and inspiring renditions of our time. “Bulb” for riffs that go far and beyond what anyone thought was possible within the confines of a metal track!

We couldn’t be prouder about the fact that their custom sounds and a little bit of their magic is bottled in this pack and available for you! So, plug your instrument straight into your sound card, launch EZmix 2, select your Metal Guitar Gods setting and start forging your next metal masterpiece. It’s really that simple!

The Metal Guitar Gods pack is available to purchase for 39 EUR / $49 USD.

Sometimes too many options can be scary – here is the widely popular and powerful multi-effect mixing tool EZmix 2 conveniently bundled with six (6) EZmix Packs optimized for the ABCs of metal mixing and mastering! This bundle takes you all the way from plugging your instrument straight into your sound card to a finished, mastered mix, ready to take over the airwaves!

A purchase will also give you a chance to win an electric guitar.

Buy and register Toontrack Music’s latest EZmix Expansion, Metal Guitar Gods and/or EZmix 2 before the end of November 2012 and you will automatically be entered into the drawing to win an 8 string Ibanez Guitar!