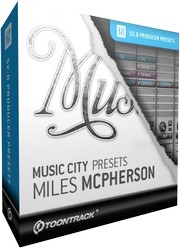 Who better to have a go at designing a pack of custom presets for the much praised Music City USA SDX™ than session drummer, songwriter/producer and Music City native himself – Nashville’s own Miles McPherson? To little surprise, he proved that Nashville isn’t just about country – it rocks. Heavily!

Miles’ presets will work perfectly for any track leaning towards the heavier side of the rock spectrum and prove once again that carefully and meticulously recorded drums combined with the powerful built-in tools in Superior Drummer® know no boundaries – they can adapt and transform beyond any preconceived genre.