The inaugural AES International Conference on Audio for Virtual and Augmented Reality, to be held on September 30 and October 1, 2016, will feature some of the most cutting edge content developers, researchers and manufacturers currently working in audio for VR / AR such as Magic Leap, BBC, Dolby, Sennheiser, Qualcomm, NASA, Fraunhofer, DTS, and many more. 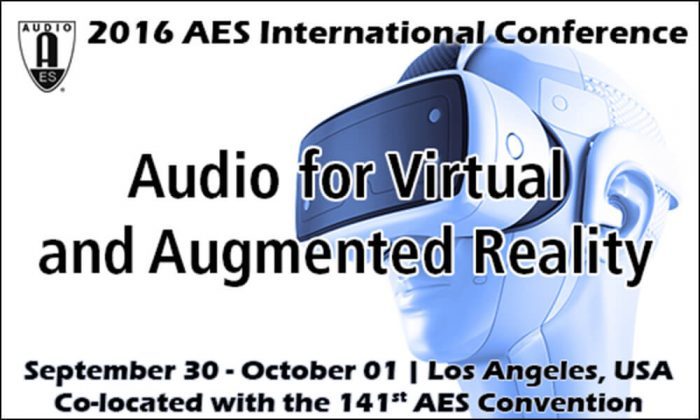 Presentations at the conference, co-located with the 141st AES Convention at the Los Angeles Convention Center’s West Hall, will appeal to wide audience, from those who are currently involved in the audio for VR / AR industry to anyone who is interested in entering in this exciting field. The companion technology showcase will feature displays and demonstrations of the latest offerings from leading manufacturers in VR / AR audio.

“This industry is moving so fast that it’s been really exhilarating to watch it evolve. Audio takes on a new role when it comes to VR / AR content as sound is now part of the experience, not just an aid in conveying story,” states Linda Gedemer, conference co-chair and CTO of Source Sound VR. Linda further explains; “We can hear in 360º unlike our visual field, which is obviously limited to what is seen directly in front of us. Because of this, audio now takes a leading role for content creators by aiding them to direct their audience on where to look next; it is central to guiding the audience through the story.”

The conference program has been carefully developed to provide a comprehensive overview of AR/VR creative processes, applications, workflows and product developments. Presentations will cover a variety of technical and practical aspects of audio for VR / AR, including papers on the latest developments in research to workshops and tutorials demonstrating cutting edge production tools. The opening keynote speech will be given by Philip Lelyveld, who runs the Virtual Reality / Augmented Reality Initiative at the University of Southern California’s Entertainment Technology Center which is a think tank within USC’s School of Cinematic Arts. The closing keynote will be given by George Sanger, ‘Grand Vizier of Noise’ for Magic Leap. In his role as Audio Director, George guides the Sonic Arts team at Magic Leap – a startup that is reimagining reality and inventing the future using digital lightfields.

The two-day program of technical papers, workshops, tutorials along with a manufacturer’s technology showcase will highlight challenges as well as creative and technical solutions to providing spatial audio for virtual reality and augmented reality media. This conference proves timely as virtual and augmented reality are demonstrably the fastest-growing section of the entertainment-audio markets.

This must-attend conference will be held within a recently-remodeled 300-seat theater and companion seminar room at the LA Convention Center. Conference registrants can also attend the 141st AES Convention’s companion exhibition along with select educational sessions and special events free of charge with an Exhibits-Plus badge included in the cost of their conference fees.