Townsend Labs has announced the addition of ten new microphone models to the Sphere plugin, the software component in the award-winning and best-in-class Sphere L22 microphone modeling system.

With the free 1.4 update, the collection now includes over 30 individual models. 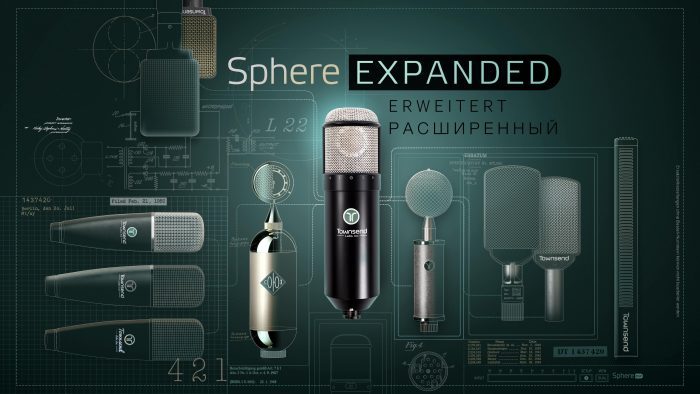 Erik Papp of Townsend Labs comments: “This update adds tremendous value to the Sphere L22 system. The Sphere Core Collection expands over time. We are proud to grow the collection by 50% with this release. It is a way of saying “Thank You” to our existing customers while providing more value to those that may have been waiting. The Sphere mic collection now covers an even wider range of uses. We are particularly happy to be able to add the Soyuz 017 TUBE, which is a modern classic. We modeled the 017 in collaboration with Soyuz, and we are honored that Soyuz chose Townsend Labs to work with us and that they entrusted us to represent their sound.”

5x Grammy award-winning audio engineer, musician and producer Cassidy Turbin (Beck, Childish Gambino, Dwight Yoakam) adds:
“The 421 models sound just as I’d expect. And even better with Sphere I was able to dial in a tighter polar-pattern from an actual 421 and greatly reduce drum bleed on an upright piano track. The Soyuz 017 TUBE modeling on the L22 makes for a really versatile microphone. It’s kind of like if a 47 and 67 had a child. Pretty damn unique.”

The Sphere plugin is free of charge and is available in the major native plugin formats (VST/VST3, AU and AAX). Also included at no additional cost are plugin versions for Universal Audio’s UAD-2/Apollo and Avid’s AAX DSP platforms.

Get 69% OFF Celestia virtual instrument by Impact Soundworks, on sale for 39 EUR