A large Turbosound system of more than 70 loudspeakers recently provided flawless coverage for 2 stages of ‘The Gentse Feesten’, one of Europe’s biggest cultural festivals held annually across the city of Ghent, Belgium. Splendit, the largest TURBOSOUND rental company in the Benelux was commissioned to ensure consistent and controlled coverage of sound, on and off the site. 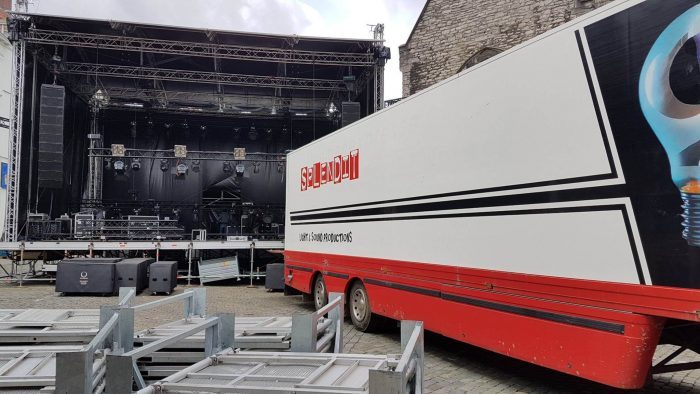 Noise control is a critical factor for the city’s 10-day long festival which takes place in and around Ghent’s residential areas. Marijn Broeckaert of Splendit explains: “The TURBOSOUND Flex Array was chosen especially for its 75 degrees dispersion. It is able to deliver such clear, directed sound to festival-goers without impacting areas out with the immediate festival.”

The dispersion, sound quality and power out of a box with this small footprint were the main reasons Dirk Brysbaert, sound manager for the Sint-Jacobs stage, choose for the TURBOSOUND Flex Array. Dirk is a long time TURBOSOUND friend and lover, going back to the TMS, Floodlight and Flashlight days.

Broeckaert continues, “In addition to the controlled dispersion of the flown arrays, both stages employed cardioid bass array set ups. This worked so good that we had nothing but compliments about the sound quality.”

The largest of the festival’s stages, the Bij St-Jacobs, consisted of two hangs of 9 TFA600H and 2 TFA600HW cabinets a side, with 12 TSW218 subs in the centrally ground-stacked at the front of the stage in a cardioid array. 2 hangs of 3 TFA600HW were then used for delays and monitors were covered by 16 TMW115 and a TFA600L drumfill sub. MIDAS’ XL4 was used at FOH for sound perfection.

For the Baudelopark stage, two hangs of 3 TFA600H and 2 TFA600HW were deployed each side with 9 TFA600L subs in a central cardioid array at the front of the stage. Again, monitors were covered by 8 TMW115 and 2 iQ12 used for in-fills. The MIDAS PRO2 digital console was utilised at FOH. On this stage Jelle Hollebeke was in charge of the sound and was able to aim the sound exactly where wanted, without spoiling the other areas.