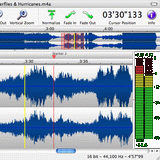 Audio editor for Mac TwistedWave was updated to v1.6.1.

TwistedWave 1.6.1 is mainly a bug fixes update. It contains very few new features or improvements, as you can see from the release notes below.

It’s been a long time since the last update, but the good news is that I have now started working full time on TwistedWave, and it shouldn’t be long before updates with more exciting new features are released.