Plugin Boutique has announced an exclusive sale on the Heavy Virtual Drummer by UJAM, offering a 57% discount on the drum instrument plugin for a limited time. 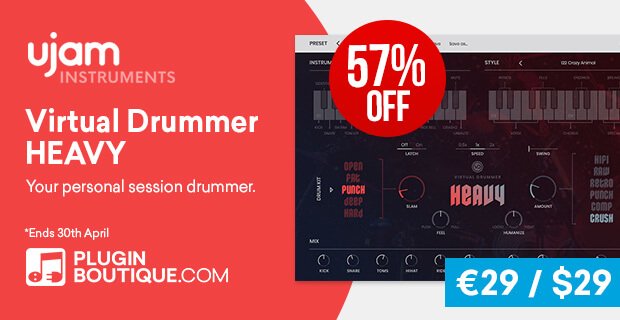 Virtual Drummer HEAVY is a forceful rock and indie specialist. For all genres from soft pop rock ballads to Seattle-style overdrive grunge, HEAVY adds a wide range of drumming styles and sounds in your production.

Heavy’s drum kits were recorded with great attention to detail and love for the genre’s specialities. We recorded real drummers’ performances on a delicate selection of sought-after instruments, selected fitting recording rooms with prime acoustical space, and employed only the finest microphones, outboard gear and mixing equipment.

W.A Production Total Bundle launched at up to 65% OFF regular