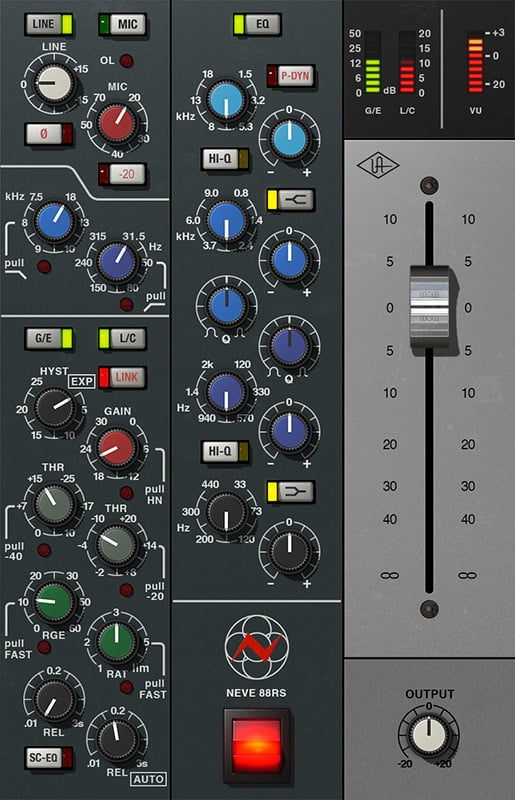 Introduced in 2001, the Neve 88 Series large-format analog console is renowned for its startling depth, airiness, and clarity. Not surprisingly, Neve 88 Series consoles are found in some of the world’s finest recording studios and scoring stages, including Skywalker Ranch, Capitol, Abbey Road, and United/Ocean Way studios.

In 2007, Universal Audio released the Neve 88RS Channel Strip plug-in, which quickly became a staple for in-the-box mixing. Today, UA’s team of engineers have improved each section of the original plug-in and incorporated Unison™ technology (exclusively on Apollo preamps), capturing all of the 88RS mic/line preamp’s impedance, gain stage “sweet spots,” and circuit behaviors that have made it the modern benchmark in analog preamp design.

The undisputed alpha dog of rock and roll guitar amps, the Marshall 1959 Super Lead amplifier is as legendary as the music it helped create. From Jimi Hendrix to Jimmy Page, Duane Allman to Eric Clapton, the Plexi’s snarl, sustain, smoothness, and raunch defined the sound of rock.

Developed by Softube — and available exclusively for UAD-2 hardware and Apollo audio interfaces — the Marshall Plexi Super Lead 1959 plug-in is an expert emulation of this 100-watt British classic.

Softube enlisted legendary AC/DC engineer Tony Platt to capture exquisite cabinet and microphone simulations using his tried-and-true mic recipes. Producers and guitarists can choose from 50 Platt-designed presets or craft their own tones with the plug-in’s onboard mixer.

Denmark’s Tube-Tech have been a leading purveyor of high-end tube hardware for over 30 years. The company’s flagship CL 1B compressor is a staple in recording studios worldwide and a go-to dynamics processor for a who’s-who of modern pop artists including Rihanna, Mary J. Blige, Jennifer Lopez, and Kanye West.

Developed by Softube — and officially endorsed by Tube-Tech — the CL 1B Compressor plug-in for UAD-2 and Apollo interfaces gives you opto-based tube compression to smooth any source.