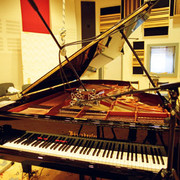 The venerable Bösendorfer Imperial 290-755 that our team hosted at the Silent Stage for two months was equipped with the famed piano manufacturer’s CEUS technology, which allowed for the most precise and by far most extensive piano sample recordings ever conducted in the history of music technology. 1,200 recorded samples per key represent a magnitude of sampling detail that has been unthinkable up to now.

The innovative implementation of meticulously recorded pedal-up and pedal-down notes in up to 100 velocities, comprehensive sympathetic resonances, and multiple release samples make the Vienna Imperial quite honestly the most realistic sampled piano ever created.

Vienna Imperial is available for Windows and Mac (VST/AU/RTAS) at a price of $875 USD. A purchase also entitles you to download the free Vienna Ensemble 2 mixing and host software.