Vox has announced JamVOX III, a jam and practice tool for guitar. 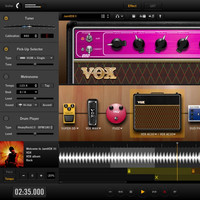 JamVOX III will be released in April, 2012, for the introductory price of $49.99 USD until May 31, 2012 (regular MSRP $99.99 USD). Current users of JamVOX can update at no charge using the JamVOX software’s auto update function or via JamVOX-Online.com.