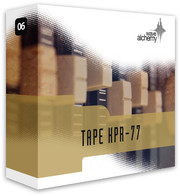 The KPR-77 was originally manufactured by Korg in the early 1980’s and was advertised as a cheaper alternative to Roland’s successful TR-606 drum machine. Surprisingly this quirky little analogue machine is capable of producing quite powerful drum sounds, we are especially fond of the t oms, snares and claps!

Tape KPR-77 contains three pre-mapped drum kit patches for use with Kontakt 2, 3, & 4 and Battery 3. Each kit makes use of extensive velocity layering, round robin sample playback and choke groups which in turn capture the quirkiness and expressiveness of the original unit.

Tape KPR-77 is available as a free download for all Wave Alchemy customers (registration required).