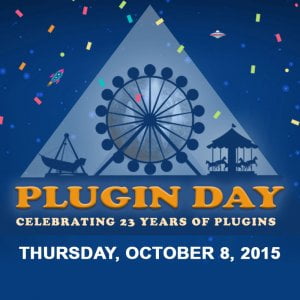 Waves Audio has announced it is celebrating Plugin Day on Thursday, October 8th, 2015.

Waves Audio has been making plugins for 23 years, ever since the introduction of the Q10 Equalizer plugin, the world’s very first paragraphic EQ, for which Waves has been inducted into the TECnology Hall of Fame. Waves has gone on to develop a comprehensive line of over 200 audio plugins, including industry standards such as the L1 and L2 Ultramaximizers, popular vintage console models, and innovative mixing tools like Waves Vocal Rider and the Artist Signature Series. For its accomplishments, Waves received a Technical GRAMMY® Award in 2011. Waves technologies are now used to improve sound quality in virtually every sector of the audio market, from recording, mixing, mastering and post-production to broadcast, live sound and consumer electronics.

Waves Audio will be celebrating these accomplishments on Thursday, October 8, with a dedicated Plugin Day on Waves.com.
The celebration will include a special behind-the-scenes documentary video about the company, plugin- and audio-related social games, and over 300 new presets to download from top producers, mixing engineers and DJs, including Dave Pensado, Greg Wells, Afrojack, John Cooper and many others. There will also be contests with various prizes, including the Waves Mercury bundle, Waves gift cards, and a variety of attractive Plugin Day specials.