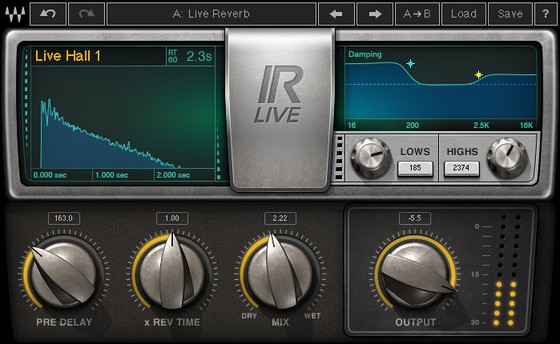 Like its predecessor, the IR1, the IR-Live is convolution-based, using sound samples called “impulse responses” (or IRs for short.)

Featuring a simple and intuitive interface, IR-Live is compatible with Waves MultiRack Native and SoundGrid platforms, as well as all of IR1’s impulse responses, including those of world famous venues such as Wembley Stadium, CBGB’s and the Grand Ole Opry. In addition, IR-Live includes samples of the world’s best-sounding hardware reverb units.

With IR-Live, FOH/live sound engineers now have virtual access to the magic of convolution-based reverb from Waves.

The IR-Live Convolution Reverb will be available soon with a MSRP of $250 USD and an introductory price of $100 USD.