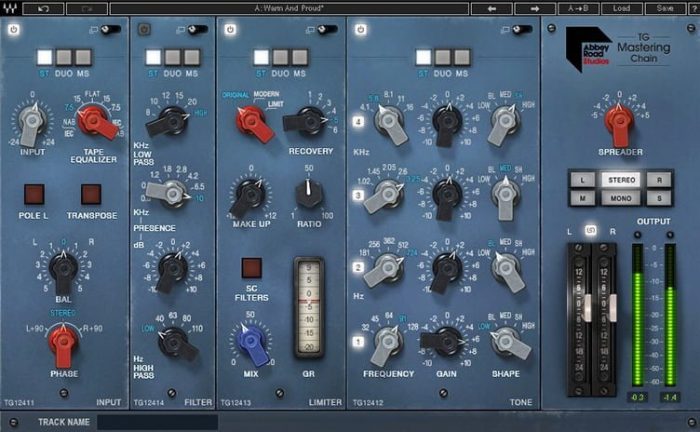 A modular mastering chain plugin modeled after the EMI TG12410 Transfer Console used in all Abbey Road’s mastering suites since the early ’70s to this day. Use the Abbey Road TG Mastering Chain to create custom processing chains with a flexible flow and the TG magic on the master bus, or on individual tracks/groups in a mixing session.

The distinct solid-state transistor-based sound of the TG12410 has proven itself time and again over many decades. Whether it’s used for mastering as a complete console, or for mixing with only select modules, the TG brings nothing less than magic — the same magic heard on albums like Pink Floyd’s The Dark Side of the Moon, Nirvana’s In Utero, Radiohead’s OK Computer and Ed Sheeran’s “+”. Thanks to this Waves/Abbey Road collaboration, the TG12410 is available outside of Abbey Road Studios and you can now bring the very same magic to your own productions.