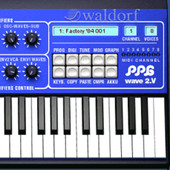 Xenos Soundworks has announced the release of Nineteen Eighty Four, a soundset for the Waldorf PPG Wave 2.V and 3.V.

“Nineteen Eighty Four, a bank of 128 presets, combines the distinctive, characteristic sounds of the 1980’s with the addition of somber, chilling textures that reflect the dystopian world described in George Orwell’s classic novel, Nineteen Eighty Four.

The 3.V version of this set makes use of Waldorf PPG Wave 3.V’s new features as well as a few additional edits.

Nineteen Eighty Four is available to purchase for the introductory price of $4.99 USD until February 1, 2011.

NOTE: The bank ships in 3 versions: The 2.V Steinberg version, the 2.V Waldorf version, plus the new 3.V version.