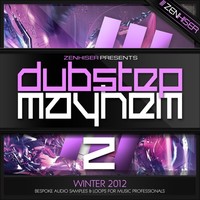 Zenhiser’s Dubstep Mayhem 2 is a sample pack featuring 180 dubstep beats, bass and fx that will twist, warp, attack and destroy any sound system.

If you’ve already bought Dubstep Mayhem 1 then this is a no brainer but if you haven’t, then you’ve just stumbled across the most manic dubstep beats and basslines known to man, these are simply huge. We thought the first sample pack was huge then our producer finished ‘Dubstep Mayhem 2’ and we were flabbergasted. The beats are phatter, the basslines more insane, the fx totally mind boggling, we had just discovered this dubstep pack is epic!

Everything in this sample pack is up front, there’s no deep progressive dubstep, no laid back breakstep, it’s full on slap in the face sounds that won’t give you any rest. We guarantee as soon as you start using these dubstep sounds and loops your studio chair will be swaying, your head rocking and some big cheesy grin will overcome your lower face. All the dubstep loops in ‘Dubstep Mayhem 2’ are bpm organised, key note tagged and folder’d by type so you can use just as much or as little as you want (we know you’re going to abuse these samples), it’s that easy with Zenhiser samples.