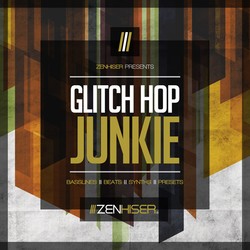 Prepare to delve into the twisted world of Glitch Hop, venture through the absolute unknown and re-emerge with an enormous collection of Glitch Hop hooks from the unadulterated funk to the Glitch slap madness that is ‘Glitch Hop Junkie’. We’ve absolutely crammed this pack with everything you need to glitch up your studio, funky ass basslines, choppy beats, tight snappy drum sounds, glitch manic fx and full on riser fx. Sounds great right, well it get’s even better, 70 Glitchtastic bassline and synth presets are also included in the pack, ready to deliver Glitch Hop preset awesomeness. Now Glitch Hop Junkie becomes a series player for all you Glitch Hop, Glitch Step and Breaks producers.

The sound sculptures of this sample pack is second to none and with striking presets to boot Glitch Hop Junkie becomes one of the most dynamic and user friendly packs Zenhiser has ever created.