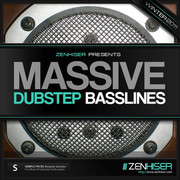 Massive Dubstep Basslines are huge, absolutely huge and at 200+ brand spanking new, floor rumbling, synth wobbling bassline loops you would think that this is well worth the money, well to push your production skills a little further and break free of wav file restrictions we’ve included 51 incredible NI Massive presets and patches to deliver a whole new away of dubstep and electro house basslines that will sound and smell fresher than your girlfriends knickers!

This sample pack and NI Massive presets sheds a whole new sound library for your dubstep productions both instantly and supplying endless possibilities to dubstep creativeness.

Massive Dubstep Basslines is available to purchase for $24.99 AUD.