Zenhiser has released Massive Dubstep Sounds, a soundset for the Massive software synthesizer by Native Instruments. 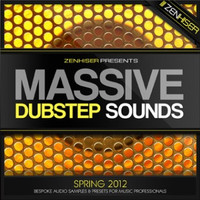 Do you like it dirty, power driven and slammin, well if you’re talking about your dubstep presets then ‘Massive Dubstep Sounds‘ is 100% for you. Every one of the 100 brand new dubstep presets within this Zenhiser pack has been crafted and developed to supply an extreme amount of power, clarity and drive.

Broken up into multiple folders including bass, fx, leads and pads, with mirror copies in .ksd and .nmsv presets means this pack delivers the whole range of dubstep sounds for all your productions.

With this dubstep arsenal under your belt you can now deliver tracks and remixes that only top end dubstep producers could do. The amount of time spent on these massive dubstep presets means all the hard work is done for you, just load up the preset you want and you’re ready to use and abuse the sound. Insane bass sounds including full on wobbles and crunching bass drivers, screaming lead sounds, mind blowing fx for transitions and power pads to finishes this exclusive dubstep preset pack perfectly.

The soundset is available to purchase for $25 USD.