Zoom and Samson Technologies have introduced the G3, a guitar effects and amp simulator pedal with multi-effects, and onboard looper. 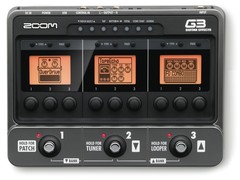 The Zoom G3 combines the ease of a stompbox pedalboard with the power of a multi-effects pedal, and adds the convenience of an onboard drum machine, looper, and USB audio interface. According to Zoom, the new G3 pedal offfers complete control over both individual effects and amp modeling, allowing you to modify your tones on the fly while performing. The included drum machine and looper make the G3 an all around good option for guitarists of every level.

What’s more, the G3 features three large LCD displays and corresponding footswitches that form a graphical interface that allows you to use up to three amp models or stompbox effects in any combination at any time. The G3 provides authentic amplifier modeling and over 100 built-in DSP effects to craft and store up to 100 original tones.

About the new pedal, Mark Wilder, Director of Marketing for Samson Technologies (Zoom’s U.S. distributor), comments, “To elevate their performance, guitar players can now use on-the-fly patch changes, craft their own sounds, jam along with the drum machine and looper or utilize DAW recording applications all with one easy-to-use pedal.”

In addition to being a guitar effects and amp simulator pedal, the new G3 is a USB audio interface for DAW recording on your computer. For creating new patches, recording, and editing purposes, the pedal comes bundled with Zoom Edit & Share software, as well as the Steinberg Sequal LE digital audio workstation (DAW). The G3 can be powered by either four AA batteries for over six hours of operation, or with a USB bus or the included AC adapter.