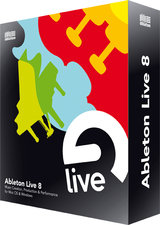 Ableton has updated its Live music production software to version 8.2.5.

Live 8.2.5 now officially supports Mac OS X 10.7 Lion – please make sure to check that all of your third-party plug-ins and audio/MIDI hardware are Lion-compatible before upgrading your OS.

Live 8.2.5 introduces significant improvements to MIDI sync, in addition to other feature changes and bugfixes.