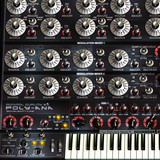 Version 1.17 of Poly-Ana and L’il Poly-Ana is released, now with Audio Units support on OSX! (Note that you must install both the VST and AU for the AU version to work correctly.)