AfroDJMac has released the Michael Jackson Synth, a latest in a series of free weekly Ableton Live Racks. 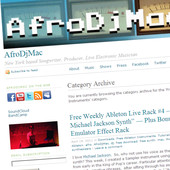 I love Michael Jackson. So, why not use his voice as the groundwork for a new synth? This week, I created a Sampler instrument using various vocal snippets from early in the King of Pop’s career. Particular attention was paid to finding especially emotive phrases. After sifting through his impressive catalog, I settled on using bits from “Ben,” “I Want You Back,” “Rock With You,” and “I’ll Be There.” Follow along with the video tutorial as I explain how the instrument works, some effects I’ve applied, and, most importantly, how it can be modified. This instrument is a fun one, because its sound ranges anywhere from string section/choir synth to a super-distorted shoegazing electric guitar sound… plus it’s all created using Michael Jackson’s voice. Long Live The King.

What’s more? Well, this week you are getting two Device Racks. I’ve included an effect rack using Ableton’s Amp and Cabinet plug ins. I did a little frequency splitting on this one; only the high frequencies are effected, while the lower ones pass through un-effected. This rack is meant to dirty up your sound, while preserving the bass frequencies.