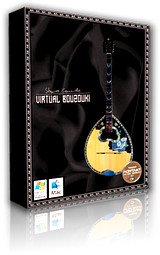 Virtual Bouzouki is a Greek bouzouki sample library that with it’s realistic sound and it’s many functions will spread the Greek spirit around the world! Virtual Bouzouki is a Kontakt Player instrument based on advanced script programming and has different playing styles and techniques which gives you a brilliant sound.