Guitar Master Class (GMC) has announced the addition of Alex Feather Akimov to the teacher roster of its guitar lesson community. 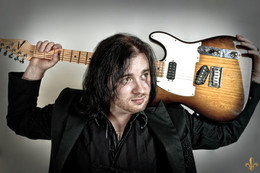 Alex is a session musician – guitarist, composer and producer from Los Angeles, USA with a rich experience both from studios and touring. Born in 1986, he was just an 11 year boy when he started playing his first chords on his mother’s old guitar, inspired by his first idols – The Beatles.

Educated from Moscow College of Music and graduated from LAMA (Los Angeles Music Academy) learning jazz and classical guitar, he is now the master of fusion style. He usually gets his ideas from something he would hear as a good beat, here and there, but people who support him like family and fans inspire him the most. Alex is always searching for More and New in all aspects of his music. His favorite guitarist is Greg Howe whom he learned from on LAMA. The two of them recorded together an instrumental song called “Search”. Among other songs on his albums, he recorded a single track with Frank Gambale called “Beautiful Lani” which is featured as his first guitar lesson on Guitar Master Class and will be officially released in the following months. He worked with many famous names like Greg Howe, Steve Vai, Britney Spears, Irene Nelson, Rihanna – “Love The Way You Lie Heavy Remix” and others. His third album is being recorded and will be released this year.

When talking about the best promotional tools for a musician, Alex says that fans are the most valuable ones, of course if they like your songs. He believes that the future of music is not on labels anymore, rather on social networks. The musician has to work on his own promotion all the time in order to reach as many fans as he can. His first numerous fans made over 350 thousands of views on his YouTube single “All About The Rain”.

Alex Feather performed more than a 100 shows all around US with great artists. He also worked with famous producers like Skip Saylor, Steven Orchard, Brian Garcia. Alex made a sound track for the movie: “Live Fast, Die Hard”.

Alex is now going to share his guitar knowledge and wide music experience online, on one of the biggest guitar lesson communities: The Guitar Master Class – which will be celebrating 15 000 members in February 2012.
Alex is producing lessons in fusion/funk/jazz style and is available for any questions or just hanging out in the GMC forum.