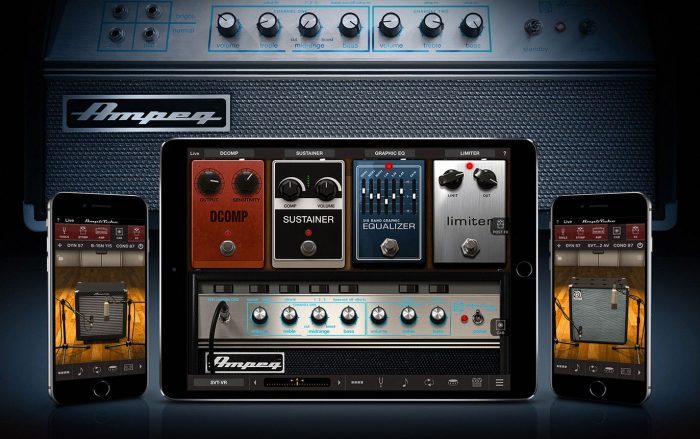 The three new matching amps and cabs in the collection are:

SVT-VR amp – A vintage reissue of an early 1970s “Blue-Line” SVT head. The preamp stage, power section, and even rocker switches emulate the exact signal path, tone, and vibe of the original rock ‘n’ roll workhorse, from its input jack all the way to its six 6550 output tubes.

SVT-810 AV cab – The classic Ampeg seen on stages worldwide. Identical to the Classic Series SVT-810E, the AV version has the fit and finish of the original Ampeg SVT stack. The SVT-810AV Infinite BaffleTM design has remained constant since 1969 and delivers the punchy, round sound that defines the Ampeg tone. The air-moving capability of eight 10″ speakers combined reacts faster to transients than fifteens or eighteens. The result is sound that can be felt, and that truly delivers what players want out of a bass rig.

V-4B amp – This 100W All-Tube Bass Head is a remarkable reissue of the legendary original from 1971, delivering the pure tube tone and unmistakable grind that earned the classic a place in bass history.

HERITAGE B-15N amp – A design that delivers legendary tone that truly lives up to the iconic standard set by inventor Jess Oliver 50 years ago. The Heritage B-15 features the circuit paths of both a 1964 and 1966 B-15, including classic Baxandall EQ controls and premium 6SL7 octal preamp tubes along with a bias switch, recreating each years’ distinctive bias methodology.

B-15N 115 cab – This extremely high-quality flip-top cabinet features the legendary double-baffle design of the B-15 Heritage cabinet and houses a custom-designed 15″ Eminence® driver. The Heritage B-15 is no mere tribute; it meets and exceeds the performance, look and tone of the legendary original, down to each and every component.

All are officially licensed models that offer the true sound and feel players expect from an Ampeg bass rig.

The Ampeg Collection 2 is available now for version 4.6 of the AmpliTube or AmpliTube CS apps for iPhone and iPad. It can be purchased via the in-app shop for only $14.99 USD.

These amps are also now included in the AmpliTube All-Amps 2018 and AmpliTube All-In 2018 bundles, and are free to users who have already purchased these bundles.