Waves SoundGrid is a real-time processing and networking platform that allows your DAW to offload its plugin processing. SoundGrid integrates seamlessly with all DAWs, providing endless possibilities for setups of every size in studio, live and post-production workflows. With a simple Ethernet connection, the Symphony I/O brings ultimate sound quality to the infinite possibilities of a Waves SoundGrid network system. Now, you can easily connect multiple spaces and multiple workstations, and experience almost infinite DSP power to build your ideal audio network solution. Add a network switch to connect several interfaces, additional workstations, and external DSP power to offload your DAW’s processing, making it possible to run hundreds of SoundGrid-compatible plugins simultaneously. 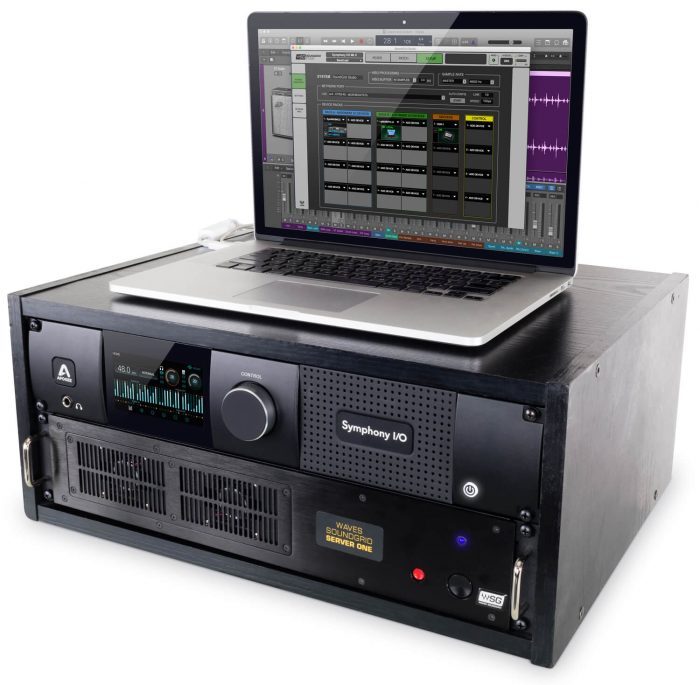 The Symphony I/O Mk II can also be used with Waves’ eMotion LV1 software mixer, a revolutionary digital mixing console for front-of-house, monitor and broadcast engineers. The LV1 mixer delivers the superior sound quality for which Waves is renowned as well as the convenience and speed needed in demanding live environments. Waves’ eMotion LV1 comes in three configurations: 64, 32 or 16 stereo/mono input channels. It uses the SoundGrid infrastructure for audio networking and can be controlled by hardware control surfaces and multi-touch devices, ranging from multiple 5-point touchscreens to a single laptop or tablet. Combined with a SoundGrid enabled Symphony I/O Mk II and Waves plugins, you can now have access to a superior sounding live system for a fraction of the cost of alternative solutions.

“We’re very pleased to be working with Waves to bring a SoundGrid-enabled Symphony I/O Mk II to Apogee and Waves customers”, commented Sean McArthur, Director of Marketing for Apogee Electronics. “Symphony I/O Mk II is a flagship product that reflects more than 30 years of our expertise in making superior digital audio recording interfaces and it’s a platform we are still building on. Adding SoundGrid connectivity to Symphony offers customers the best of both worlds in professional audio quality and ultra-low latency plugin processing over a network. It’s an ideal solution for studio recording and live sound production.”

Mick Olesh, Waves EVP of Sales & Marketing, comments, “We are delighted to collaborate with Apogee and offer Waves SoundGrid technology and the use of Waves plugins to the Symphony I/O Mk II, thus augmenting its capabilities and offering users, whether in studio or live, a substantial increase in its ability to network easily, a valuable high channel count per connection and extremely low latency.”