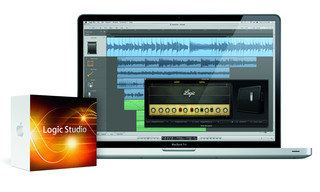 Apple has released the next version of Logic Studio, featuring major upgrades to Logic Pro and MainStage and more than 200 new features that simplify complex tasks.

For guitar players, live performers, and all musicians who record, edit, and mix their own music, the new Logic Studio is a huge leap forward. Advanced production tools take the work out of editing timing and tempo. An expansive collection of vintage and modern amps, cabinets, and stompboxes make you sound like you’re playing through legendary gear. And new live performance plug-ins let you record loops and trigger backing tracks when you’re on stage.

New in Logic Studio
Flex Time, a new collection of features that lets you manipulate timing and tempo quickly and creatively. Experience editing without all the cutting.

Production Tools, allow musicians to tackle any part of the recording, editing, and mixing process they want — and get it done in a fraction of the time.

Live Performance, MainStage 2 lets you hit the stage with all the same instruments and effects you used on your recording, and adds a backing track player and live loop recorder.