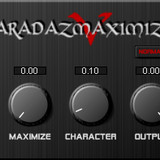 Aradaz Maximizer 5 Audio Units and VST plugins for Mac has been released. Both version are in Universal Binary format, it can be used for Intel and Power-PC based Mac computers.

Aradaz Maximizer 5 is available as a free download for PC and Mac (VST/AU).