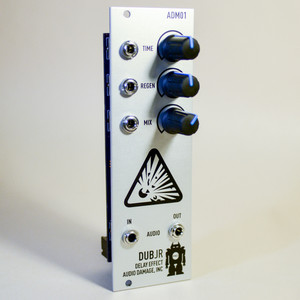 After two years of R&D (a sentence fragment that in no way conveys the experience we’ve just been through), and coincidentally during the week of Audio Damage’s tenth anniversary, we have succeeded in releasing a hardware platform for our DSP effects, and are ludicrously proud to unveil the first three Audio Damage hardware products: DubJr, Grainshift, and Errorbox.

The modules are available to purchase via Audio Damage’s retail partners for $179 USD each (currently exclusively at Analogue Haven).