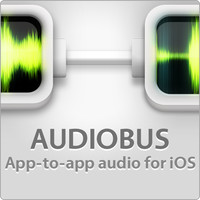 A Tasty Pixel in partnership with Audanika has launched Audiobus, a revolutionary new app for iPad and iPhone set to reinvent iOS music making with its ability to connect music apps together, just as cables connect audio equipment.

Support for the app is already built into such leading iOS music apps as Rebirth, JamUp, NLog, Sunrizer and more, with over 750 more developers registered to implement Audiobus in their own music apps.

“Audiobus is going to fundamentally change the way people make music on the iPad and iPhone,” said Audiobus developer Michael Tyson. “The app works like virtual audio cables, turning a platform of isolated apps into a community of pluggable components that work together seamlessly, far greater than the sum of their parts. Nothing like this has even been attempted before.”

With a clean and simple user interface, the app allows users to easily connect the output of one Audiobus-compatible app into the input of another, playing a synthesizer live into a looper or multi-track recorder, or using one app to manipulate the live output of another.

“It’s what so many iOS music makers want: to be able to use multiple apps at the same time, mixing together the audio from each of them into a single project,” wrote leading musicians’ gear website Music Radar recently, dubbing the app “groundbreaking”.

Audiobus is now available on the App Store for $9.99 USD.