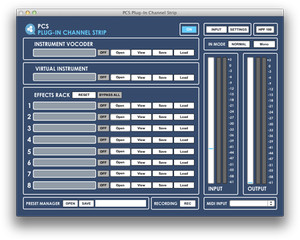 Plug-In Channel Strip features eight plug-in modules where you can load any VST effect to design your own VST channel strip, including plug-ins like equalizers, delays, reverbs, distortion, flanger, compressors or any other VST effect from your computer.

Send your mic or instrument input into PCS to design the sound you want while PCS processes the incoming audio through eight plug-In modules.

The Plug-In Channel Strip for Mac OS X 10.6 or later is available to purchase for $7 USD / 5 EUR. Windows version is coming soon.