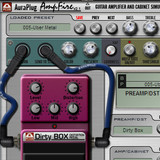 AuraPlug has released version 2.2 of the demo version of AmpFire, an effect plug-in designed for metal guitar players.

AmpFire is a preamplifier, distortion, power amplifier and speaker cabinet simulator in one. AmpFire does not contain effects (except for an input Noise gate). We focused on guitar-sound and low CPU usage when designing AmpFire. Plugins deriving from other manufacturers are easy to add to post-AmpFire VST series. Countless VST effects are available for this.