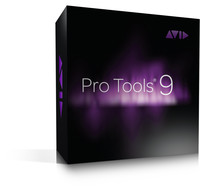 Avid has released version 9.0.5 of Pro Tools, the audio and music production software for Widnows and Mac.