Backbeat Books has announced it has published The Epiphone Guitar Book, the inside story of one of the world’s leading guitar makers by Walter Carter. 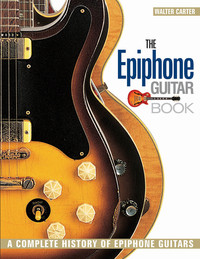 The epic story of Epiphone, one of the world’s oldest and most famous guitar companies, spans three centuries, from its Old World roots in the 19th century to the golden age of American guitar makers in the 20th century and onward into the global market of the new millennium.

Former staff historian Walter Carter recounts the story in The Epiphone Guitar Book, mirroring the story of American business, from an individual luthier to a family business and on to corporate ownership. This is also the story of American popular music, powered by Epiphone guitars, from the big-bodied Emperor that drove the swing bands of the 1930s to the electric hollow-bodies of the 1960s used by the Beatles, to the custom solid-body models preferred by such modern rockers as Noel Gallagher (Oasis) and Frank Iero (My Chemical Romance).

Along the way, Carter considers the effect of new ownership by Gibson, starting in the late 1950s, and the way that Epiphone survived moves to offshore production to take on the strong individual identity it enjoys today. Beautifully illustrated with photographs of all the important Epiphone instruments and the extraordinary musicians who played them, and featuring a collector’s section that provides specifications for every Epiphone guitar made from the 1920s to the present, The Epiphone Guitar Book is the fascinating story of how a name in the world of the guitar became iconic.