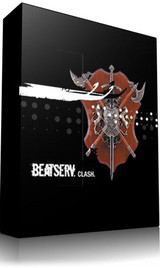 Based on the Iron Chef concept, the Clash beats were played and recorded by Beatserv’s own Corey McCafferty before we sliced, diced, re-sampled and reassembled them into entirely new loops.

Both the original live loops and at least three interpretations of each are included as 42 distinct beat sets, a total of over 300 loops including multiple variations and breaks.