Voyager Drums brings you two Power Drum Kits, recorded and edited by the maker of “Artist-Drums” and “Artist Grooves”.

The punchy and powerful sound is perfect for your Pop, Rock, Jazz and Funk productions. 360 MIDI Grooves for instant use are included.

Voyager Drums is available to pre-order for 79 EUR (regular 99 EUR). It will be available mid February 2015.

TITAN 2 — the biggest and most extensive Synthesizer Sound Collection of all times! 24GB in size (78GB uncompressed) 10.000 multi samples, 200.000 single samples cover 244 of the greates classic analog and digital synths, workstations and the biggest modular systems as well as every recent trendy software synthesizer on the market.

Key focus was to preserve the unique sound character of the originals and to additianally give you the possibility to model completely new soundscapes never heard before.

TITAN 2 as well as the upgrade from TITAN (1) will be available from end of February 2015. 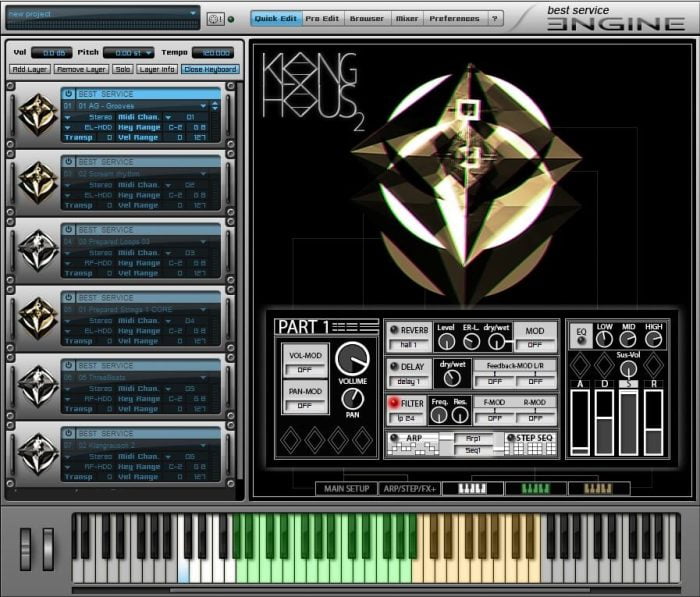 With your KLANGHAUS 2 virtual instrument you have access to a collection of unique instruments, invented and constructed by Ferdinand Foersch. We recorded these instruments with best care and attention and then spent hundreds of hours to map them according to Ferdinand Foersch´s ideas and visions.

The result is a new instrument with lots of surprising sounds, divided in different categories. All rhythmical sequences are midi based and therefore adjust seamlessly to your sequencers speed. Also the midi input for the rhythmical sequences is quantized to “the next beat” for additional timing accuracy. ERA II is a unique sample library featuring a huge set of historical instruments. All you have been waiting for your Medieval, Renaissance or Fantasy musical producti on in one virtual instrument.

Eduardo Tarilontes ERA II will follow the successful path of its predecessor and give you the best Medieval Instruments available in a virtual environment. With now more than 70 Instruments (25 new ones), more soundscapes, singers and a greatly enhanced user interface, this library is a must have, not only for all film and game composers.

Plucked, wind, reed, bowed, keyed and percussion multi sampled instruments, voices and an inspiring collecti on of magical soundscapes will push your music to the next level.

ERA II will be released by the end of March 2015. An Upgrade for users of Era will be available.

Emotional Cello — Virtual Cello for classic and cinematic use

Emotional Cello the new Kontakt Player instrument by Harmonic Subtones brings you a powerful and touching sound, which was recorded in a musical context to capture the natural bowing and expressive dynamics of a real player. Emotional Cello has been designed to be applicable for classical settings as well as contemporary musical styles.